Musicians in Crisis: Working and Playing in the Greek Popular Music Industry

Description - Musicians in Crisis: Working and Playing in the Greek Popular Music Industry by Ioannis Tsioulakis

Musicians in Crisis is a music ethnography of contemporary Athens, before and during the infamous economic and political crisis. It spans two contrasting periods in Greece: the last few years of relative economic prosperity and social cohesion (2005-2009) and the following period of austerity and socio-political turmoil (2010-2017). Based on the author's participation and professional involvement in the local music scenes since 2005, the monograph untangles a web of creative practices, economic strategies and social ideologies through the previously unheard voices of Athenian music professionals. The book follows the life stories of freelance musicians of different genders, ages, educational backgrounds and musical genres, while they 'work' and 'play' in Athenian venues, recording studios and classrooms. Adding to the growing literature on precarity and resistance in the creative industries, it traces the effects of unprecedented socioeconomic circumstances on musicians' everyday experience, as well as the actions and solidarities that help them to navigate personal and collective devastation. Through rich and evocative testimonies from the labourers of an industrious popular music scene, Musicians in Crisis contests popular narratives of the Greek predicament as they are reported by political and financial elites through international media. In this process, the book tells a story about how popular music is made in the liminal spaces between East and West, affuence and poverty, harmony and turmoil.

Other Editions - Musicians in Crisis: Working and Playing in the Greek Popular Music Industry by Ioannis Tsioulakis 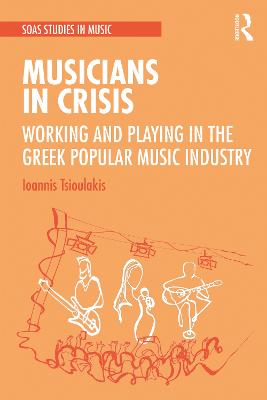 A Preview for this title is currently not available.
More Books By Ioannis Tsioulakis
View All