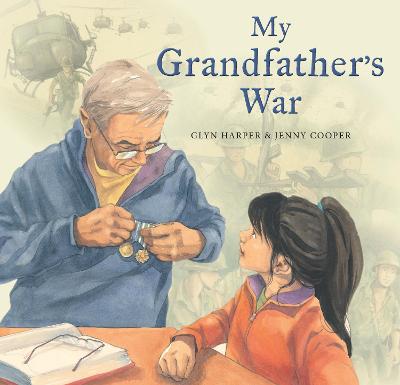 The award-winning team of Glyn Harper and Jenny Cooper share this poignant story about a Vietnam veteran and his relationship with his granddaughter. While the relationship is a positive one, the young girl senses her grandfather's pain and is curious to find out the cause of it. As she innocently seeks answers, she unknowingly opens old wounds and discovers her grandfather's sadness is a legacy of the Vietnam War and his experiences there. This is a sensitive exploration of the lingering cost of war and of the PTSD so many returned servicemen experience. Released to coincide with the 50th anniversary of the Battle of Khe Sanh (the Vietnam War's longest battle), it also sheds light on a war that is not always remembered in the same way that the world wars and other conflicts are. Many who served experience a sense of betrayal at the treatment they received on their return, as the conflict came to be regarded as the 'unpopular' war, and this is covered in a child-friendly way in a note at the back of the book.