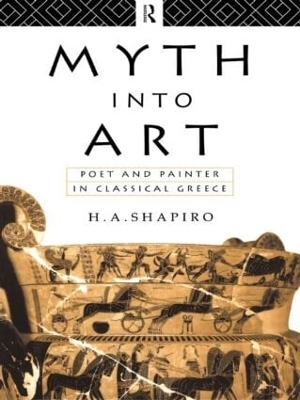 Poet and Painter in Classical Greece

Description - Myth Into Art by H. A. Shapiro

How did the visual artist adapt mythological tales from Greek literature to the medium of painted poetry? Myth into Art is an introduction to this critical field of Greek iconography. The book focuses on the problem of narrative, the different means by which poet and painter tell the same story rather than presenting a conventional survey of Greek myths. The approach is a comparative one, with excerpts from Greek authors set alongside the corresponding images within a text. It is less a retelling of the myths than an interpretation of how they were rendered. Thirty well known myths are treated, covering the principal texts from the Homeric epics to the tragedies of fifth-century Athens. The artistic material, featuring 130 black and white illustrations, concentrates on the black and red figure cases of Athens and South Italy from the sixth to the fourth century BC. The book is thus an introduction both to the myths themselves and to the use of vase-painting as an essential primary source, alongside the texts, for an appreciation of the Greek view of myth.
Myth into Art shows how the Greek artist was influenced by the poetic sources on which he drew and how the artist communicates with the viewer in a fundamentally different way from the poet and his audience. It is directed primarily at undergraduate students of classical civilisation, mythology, Greek literature and art.

Other Editions - Myth Into Art by H. A. Shapiro A Preview for this title is currently not available.
More Books By H. A. Shapiro
View All