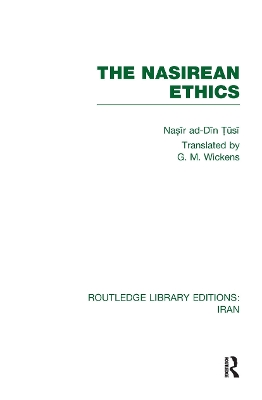 The Nasirean Ethics is the best known ethical digest to be composed in medieval Persia, if not in all mediaeval Islam. It appeared initially in 633/1235 when TA"sA" was already a celebrated scholar, scientist, politico-religious propagandist. The work has a special significance as being composed by an outstanding figure at a crucial time in the history he was himself helping to shape: some twenty years later TA"sA" was to cross the greatest psychological watershed in Islamic civilization, playing a leading part in the capture of Baghdad and the extinction of the generally acknowledged Caliphate there. In this work the author is primarily concerned with the criteria of human behaviour: first in terms of space and priority allotted, at the individual level, secondly, at the economic level and thirdly at the political level.

A Preview for this title is currently not available.
More Books By Nasir Tusi
View All