Unlike regionalism in architecture, which has been widely discussed in recent years, nationalism in architecture has not been so well explored and understood. However, the most powerful collective representation of a nation is through its architecture and how that architecture engages the global arena by expressing, defining and sometimes negating a sense of nation in order to participate in the international world. Bringing together case studies from Europe, North and South America, the Middle East, Africa, Asia and Australia, this book provides a truly global exploration of the relationship between architecture and nationalism, via the themes of regionalism and representation, various national building projects, ethnic and trans-national expression, national identities and histories of nationalist architecture and the philosophies and sociological studies of nationalism. It argues that nationalism needs to be trans-national as a notion to be critically understood and the geographical scope of the proposed volume reflects the continuing relevance of the topic within current architectural scholarship as an overarching notion. The interdisciplinary essays are coherently grouped together in three thematic sections: Revisiting Nationalism, Interpreting Nationalism and Questioning Nationalism. These chapters, offer vignettes of the protean appearances of nationalism across nations, and offer a basis of developing wider knowledge and critically situated understanding of the question, beyond a singular nation's limited bounds.

Other Editions - Nationalism and Architecture by Darren Deane 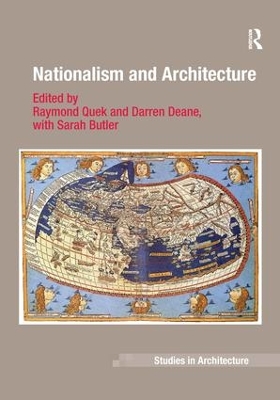 A Preview for this title is currently not available.
More Books By Darren Deane
View All