An Anthology of Texts

The Nazi Germany Sourcebook is an exciting new collection of documents on the origins, rise, course and consequences of National Socialism, the Third Reich, the Second World War, and the Holocaust. Packed full of both official and private papers from the perspectives of perpetrators and victims, these sources offer a revealing insight into why Nazism came into being, its extraordinary popularity in the 1930s, how it affected the lives of people, and what it means to us today. This carefully edited series of 148 documents, drawn from 1850 to 2000, covers the pre-history and aftermath of Nazism. Sources include legislative and diplomatic records, minutes of meetings, speeches and manifestoes, personal diaries and eyewitness accounts. Each document is preceded by a brief critical analysis that also provides the historical context in which it was written.
The Nazi Germany Sourcebook focuses on key areas of study, helping students to understand and critically evaluate this extraordinary historical episode: * the ideological roots of Nazism, and World War I * the Weimar Republic * the consolidation of Nazi power * Hitler's motives, aims and preparation for war * World War II * the Holocaust * the Cold War and recent historical debates. The Nazi Germany Sourcebook contains numerous documents that have never before been published in English, and some documents, such as Goebbles' 1941 diaries that have only recently been discovered. This up-to-date and carefully edited collection of primary sources provides fascinating reading for anyone interested in this historical phenomenon.

Other Editions - The Nazi Germany Sourcebook by Roderick Stackelberg 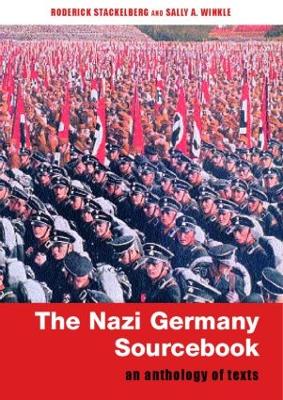 A Preview for this title is currently not available.
More Books By Roderick Stackelberg
View All