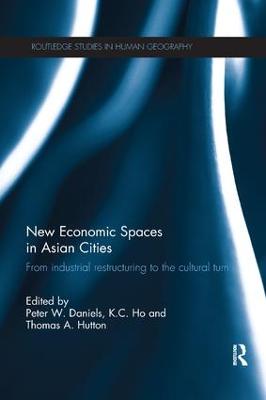 From Industrial Restructuring to the Cultural Turn

The East and Southeast Asia region constitutes the world's most compelling theatre of accelerated globalization and industrial restructuring. Following a spectacular realization of the 'industrialization paradigm' and a period of services-led growth, the early twenty-first century economic landscape among leading Asian states now comprises a burgeoning 'New Economy' spectrum of the most advanced industrial trajectories, including finance, the knowledge economy and the 'new cultural economy'. In an agenda-setting volume, New Economic Spaces in Asian Cities draws on stimulating research conducted by a new generation of urban scholars to generate critical analysis and theoretical insights on the New Economy phenomenon within Asia.

New industry formation and the transformation of older economic practices constitute instruments of development, as well as signifiers of larger processes of change, expressed in the reproduction of space in the city. Asia's major cities become the key staging areas for the New Economy, driven by the growing wealth of an urban middle and professional class, higher education institutions, city-based inter-regional movements and urban mega-projects. New Economic Spaces in Asian Cites animates this New Economy discourse by means of vibrant storylines of instructive cities and sites, including cases studies situated in cities such as Tokyo, Seoul, Shanghai, Beijing, Shenzhen, and Singapore. Theoretical and normative issues associated with the emergence of the new cultural economy are the subject of the book's context-setting chapters, and each case study presents an evocative narrative of development interdependencies and exemplary outcomes on the ground.

New Economic Spaces in Asian Cities offers a vivid contribution to our understanding of the ongoing transformation of Asia's urban system, including the critical intersections of global and local-regional dynamics in processes of new industry formation and the relayering of space in the Asian metropolis. The synthesis of empirical profiles, normative insights, and theoretical reference points enhances the book's interest for scholars and students in fields of Asian studies, urban and cultural studies, and urban and economic geography, as well as for policy specialists and urban/community planners. A Preview for this title is currently not available.
More Books By Peter W. Daniels
View All