New Theatre in Italy 1963-2013 makes the case for the centrality of late-millennium Italian avant-garde theatre in the development of the new forms of performance that have emerged in the 21st Century. Starting in the Sixties, young artists and militants in Italy reacted to the violence in their streets and ruptures in the family unit that are now recognized as having been harbingers of the end of the global post-war system. As traditional rituals of State and Church faltered, a new generation of cultural operators, largely untrained and driven away from political activism, formed collectives to explore new ways of speaking theatrically, new ways to create and experience performance, and new relationships between performer and spectator. Although the vast majority of the works created were transient, like all performance, their aesthetic and social effects continue to surface today across media on a global scale, affecting visual art, cinema, television and the behavioural aesthetics of social networks.

Other Editions - New Theatre in Italy by Valentina Valentini 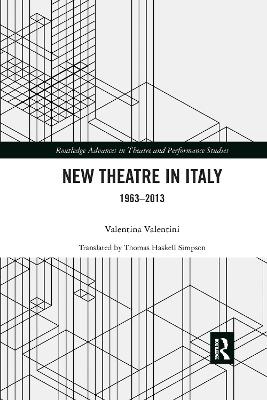 A Preview for this title is currently not available.
More Books By Valentina Valentini
View All