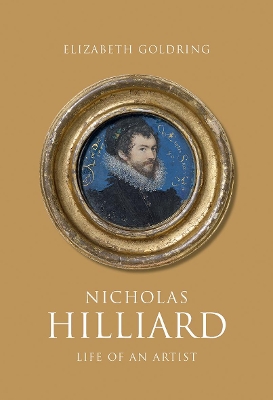 Nicholas Hilliard: Life of an Artist

Description - Nicholas Hilliard: Life of an Artist by Elizabeth Goldring

This illustrated biography follows Nicholas Hilliard's long and remarkable life (c. 1547-1619) from the West Country to the heart of the Elizabethan and Jacobean courts. It showcases new archival research and stunning images, many reproduced in color for the first time. Hilliard's portraits-some no larger than a watch-face-have decisively shaped perceptions of the appearances and personalities of many key figures in one of the most exciting, if volatile, periods in British history. His sitters included Elizabeth I, James I, and Mary, Queen of Scots; explorers Sir Francis Drake and Sir Walter Raleigh; and members of the emerging middle class from which he himself hailed. Hilliard counted the Medici, the Valois, the Habsburgs, and the Bourbons among his Continental European patrons and admirers. Published to mark the 400th anniversary of Hilliard's death, this is the definitive biography of one of Britain's most notable artists.

A Preview for this title is currently not available.
More Books By Elizabeth Goldring
View All

Centerbook - The Center for Advanced Visual Studies and the Evolution of Art-Science-Technology at MIT
Elizabeth Goldring
Hardback , Nov '19
RRP: $74.99 $67.49