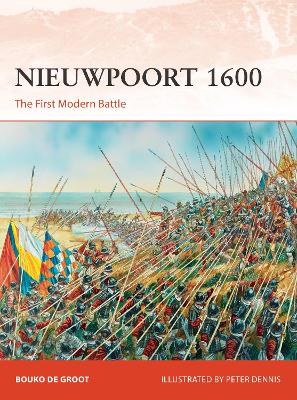 The Eighty Years' War began as a limited Dutch rebellion seeking only religious tolerance from their Spanish overlords, but it quickly escalated into one of the longest wars in European history. Spain's failed invasion of 1599 and the mutinies that followed convinced Dutch leaders that they now should go on the offensive. This campaign pitted two famous leaders' sons against each other: Maurice of Nassau and Archduke Albert VII. One led an unproven new model army, the other Spain's 'unbeatable' Tercios, each around 11,000-men strong.

The Dutch wanted to land near Nieuwpoort, take it and then march on to Dunkirk, northern home port of the Spanish fleet, but they were cut off by the resurgent and reunited Spanish army. The two forces then met on the beach and in the dunes north of Nieuwpoort. This book uses specially commissioned artwork to reveal one of the greatest battles of the Eighty Years' War - one whose influence on military theory and practice ever since has been highly significant.

A Preview for this title is currently not available.
More Books By Bouko de Groot
View All