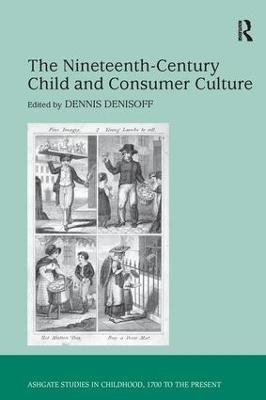 The Nineteenth-Century Child and Consumer Culture

Description - The Nineteenth-Century Child and Consumer Culture by Dennis Denisoff

During the rise of consumer culture in the nineteenth century, children and childhood were called on to fulfill a range of important roles. In addition to being consumers themselves, the young functioned as both 'goods' to be used and consumed by adults and as proof that middle-class materialist ventures were assisting in the formation of a more ethical society. Children also provided necessary labor and raw material for industry. This diverse collection addresses the roles assigned to children in the context of nineteenth-century consumer culture, at the same time that it remains steadfast in recognizing that the young did not simply exist within adult-articulated cultural contexts but were agents in their formation. Topics include toys and middle-class childhood; boyhood and toy theater; child performers on the Victorian stage; gender, sexuality and consumerism; imperialism in adventure fiction; the idealization of childhood as a form of adult entertainment and self-flattery; the commercialization of orphans; and the economics behind formulations of child poverty. Together, the essays demonstrate the rising investment both children and adults made in commodities as sources of identity and human worth. A Preview for this title is currently not available.
More Books By Dennis Denisoff
View All