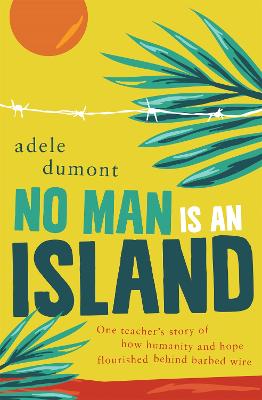 No Man is an Island

Description - No Man is an Island by Adele Dumont

In 2010, 24-year-old Sydneysider Adele Dumont volunteered to teach English to men in immigration detention on Christmas Island. She didn't expect to find the work so rewarding or the people she met so interesting. So when she was offered a job working at Curtin detention centre near Derby in Western Australia, she took it. Working at Curtin required a fly-in fly-out lifestyle. Adele lived in a donga in WA, her life full of bus trips to the detention centre; back home in Sydney, she was overwhelmed by the choices and privileges people had. What kept her returning to Curtin were her students: men from many lands who had sacrificed all they knew for a chance to live in Australia; men who were unfailingly polite to her in a situation that was barbarous. Men who were looking for an opportunity for a better life.NO MAN IS AN ISLAND is a unique personal story that takes a humanitarian stance on immigration detention. It makes the issue of immigration detention accessible to far more interested Australians than newspaper articles. It is a vividly told story full of characters and humanity. It is the story about immigration detention all Australians need to read.

Buy No Man is an Island by Adele Dumont from Australia's Online Independent Bookstore, BooksDirect.