The Politics of the Ten Commandments

Description - No Other Gods by Ana Levy-Lyons

An insightful and fresh perspective of the Ten Commandments reveals how this ancient text is the underpinning for social justice, equality, and the foundation of society.Each commandment is expanded beyond interpersonal morality to encompass the global economy and our hyper-connected age. Stealing, for example, is recast as the difference between the fair trade price of a commodity and what we pay. Keeping the Sabbath is recast as resistance to consumer culture, having enough. The Ten Commandments are a resource for everyone, from the spiritual-but-not-religious to the deeply observant, who wants to resist injustice, heal our earth, and find personal dignity amid the free-for-alls of modern life. We don't have to invent a bunch of new practices to meaningfully integrate our spirituality and politics. There is already a perfectly good set of ten of them, with as much progressive firepower as any of us can handle, that has existed for some 3000 years.Introduction: The Ten Commandments Are Practices of Liberation The First Commandment: You Shall Have No Other Gods Besides MeDethrone the Modern Deities of Political, Social, and Corporate Power The Second Commandment: Do Not Make for Yourself a Sculpted Image; Do Not Bow to Them, Do Not Serve ThemAccept No Substitutes for God's Power of Liberation The Third Commandment: Do Not Take the Name of God in VainDefend the Goodness of God; Take Responsibility for Resistance and Change The Fourth Commandment: Observe the Sabbath Day and Keep it HolySquander One Day Every Week The Fifth Commandment: Honor Your Father and Your MotherStay Accountable to Where You Came From The Sixth Commandment: Do Not KillRenounce Human and Ecological Violence The Seventh Commandment: Do Not Commit AdulteryStay In for the Long Run, Reject Throw-Away Culture The Eighth Commandment: Do Not StealPay What Stuff Really Costs in Fair Wages and the Planet's Resources The Ninth Commandment: Do Not Testify Against Your Neighbor As a Lying WitnessSpeak and Demand Truth in Every Sphere - Home, Corporations, Government The Tenth Commandment: Do Not CovetPractice Your Liberation--You Have Enough, You Are Enough

Buy No Other Gods by Ana Levy-Lyons from Australia's Online Independent Bookstore, BooksDirect.

Other Editions - No Other Gods by Ana Levy-Lyons 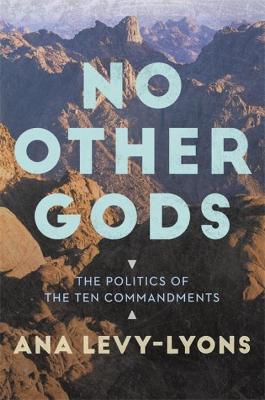