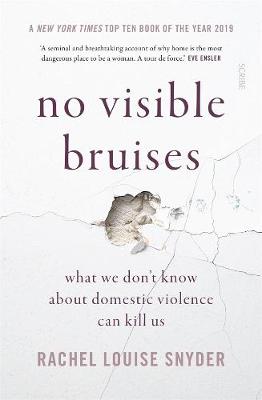 No Visible Bruises: What we don't know about domestic violence can kill us

Description - No Visible Bruises: What we don't know about domestic violence can kill us by Rachel Louise Snyder

AN ESQUIRE AND NEW YORK TIMES BOOK OF THE YEAR.

An award-winning journalist's exploration of the domestic violence epidemic, and how to combat it.

AN ESQUIRE AND NEW YORK TIMES BOOK OF THE YEAR.

An award-winning journalist's exploration of the domestic violence epidemic, and how to combat it.

An average of 137 women are killed by familial violence across the globe every day. In the UK alone, two women die each week at the hands of their partners, and in the US domestic violence homicides have risen by 32 percent since 2017. The WHO deems it a 'global epidemic'. Yet public understanding of this urgent problem remains catastrophically low.

Journalist Rachel Louise Snyder was no exception. Despite years of experience reporting on international conflicts, when it came to violence in the domestic sphere, she believed all the common assumptions- that it was a fate for the unlucky few, a matter of bad choices and cruel environments. That if things were dire enough, victims would leave. That violence inside the home was private. And, perhaps most of all, that unless you stand at the receiving end of a punch, it has nothing to do with you.

All this changed when Snyder began talking to the victims and perpetrators whose stories she tells in this book. Fearlessly reporting from the front lines of the epidemic, in No Visible Bruises she interviews men who have murdered their families, women who have nearly been murdered, and people who have grown up besieged by familial aggression, painting a vivid and nuanced picture of its reality. She talks to experts in violence prevention and law enforcement, revealing how domestic abuse has its roots in our education, economic, health, and justice systems, and how by tackling these origins we can render it preventable.

'Powerful ... Snyder exposes this hidden crisis by combining her own careful analysis with deeply upsetting and thoughtfully told accounts of the victims ... To her credit, Snyder takes seriously the underlying causes of violence, interviewing perpetrators and noting that many have often been victims themselves ... An important book..'
-Alisa Roth, The New York Times Book Review

'A brilliant work ... what makes it move with the suspense of a beach novel is Snyder's passionate storytelling, which often soars to the point of lyricism but remains unfailingly honest.'
-Ms. Magazine

Buy No Visible Bruises: What we don't know about domestic violence can kill us by Rachel Louise Snyder from Australia's Online Independent Bookstore, BooksDirect.

A Preview for this title is currently not available.
More Books By Rachel Louise Snyder
View All