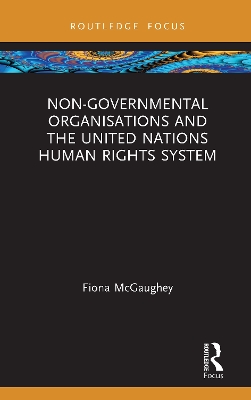 Non-governmental Organisations (NGOs) have become important, although sometimes overlooked, actors in international human rights law. Although NGOs are not generally provided for in the hard law of treaties, they use the UN human rights system to hold Governments to account. A key way in which they do so is using State reporting mechanisms, initially the UN treaty bodies, but more recently supplemented by the Human Rights Council's Universal Periodic Review. In doing so, NGOs provide information and contribute to developing recommendations. NGOs also lobby for new treaties, contribute to the drafting of these treaties, and bring individual's complaints to the UN human rights bodies.

This book charts the historical development of the NGO role in the UN. It examines the UN regulation of NGOs but the largely informal nature of the role, and an exploration of the various types of NGOs, including some less benign actors such as GONGOs (Governmental NGOs). It also draws on empirical data to illustrate NGO influence on UN human rights bodies and gives voice to stakeholders both inside and outside the UN. The book concludes that the current UN human rights system is heavily reliant on NGOs and that they play an essential fact-finding role and contribute to global democratisation and governance.

A Preview for this title is currently not available.
More Books By Fiona McGaughey
View All