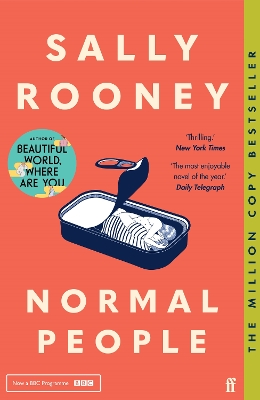 'THE LITERARY PHENOMENON OF THE DECADE' - Guardian

Connell and Marianne grow up in the same small town in the west of Ireland, but the similarities end there. In school, Connell is popular and well-liked, while Marianne is a loner. But when the two strike up a conversation - awkward but electrifying - something life-changing begins.

Normal People is a story of mutual fascination, friendship and love. It takes us from that first conversation to the years beyond, in the company of two people who try to stay apart but find they can't.

'Brilliant ... It takes immense talent to write this well and make it look so easy ... This is a novel that one enjoys like comfort food, with delight, all in a rush, and only once it has been consumed does one realise how formidable and nourishing it is, how heavy it sits inside you, a treat you'll be digesting long after you leave the table.' - The Australian

'Rooney's work is undeniably a voice for millennial fiction. My generation. Reading it felt like someone had captured my thoughts (even the secret ones) and made me feel less alone - until it ended, and then it was heartbreaking.' - Annie Brown, Good Weekend, Sydney Morning Herald

'In Normal People, Sally Rooney essentially gives us a field guide to relating to other humans - with the in-built pleasures of an exceptionally good literary romance.' - Sydney Morning Herald

'What makes Rooney's books so captivating and impossible to put down is the way she crafts characters and dialogue-at times, the conversations in her books can seem so real that you almost feel like you're eavesdropping on something you shouldn't be.' - Vanity Fair