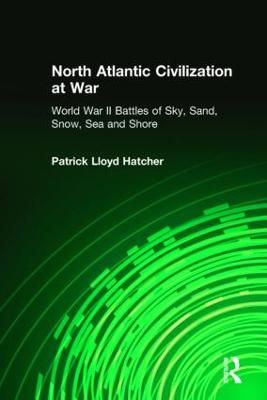 This book recounts the World War II journeys of a soldier, a ship, and a bottle of spirits through, and around, five great turning-point battles. Those battles were influenced more by geography and climate than by generals and admirals. Properly titled they would be known as the Battles of the Sky (Britain), the Sand (El Alemein), the Snow (Stalingrad), the Sea (North Atlantic), and the Shore (Normandy). Slogging their way through this quintet are an eighteen-year-old G.I. from Missouri (as seen through his letters home), an "ugly duckling" of a Liberty ship (as seen through its Armed Guard reports), and a bottle of rum (as traced by those who, after the war, made money in selling war souvenirs). It is the history of the North Atlantic sea basin and its extensions at war: the story of the lulls between battles, when America's teenage warriors often watched war movies (Humphrey Bogart made and Warner Brothers released seven during the war), sang or listened to popular tunes by songsmiths like Irving Berlin, and drank rum-and-Coke (while listening to Dick Haymes sing the hit "Rum & Coca-Cola"). While accessible and vastly entertaining, this is a serious work of history. By treating World War II in Europe much as Fernand Braudel treated the origins of Western civilization in his masterpiece The Mediterranean and the Mediterranean World in the Age of Philip II, Hatcher brings Braudelian detachment to his narrative.