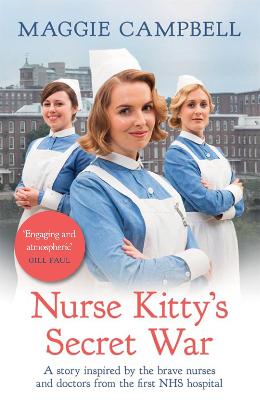 Nurse Kitty's Secret War: A novel inspired by the brave nurses and doctors from the first NHS hospital

Description - Nurse Kitty's Secret War: A novel inspired by the brave nurses and doctors from the first NHS hospital by Maggie Campbell

A novel inspired by the brave nurses and doctors from the first NHS hospital, the Trafford General, opened after the end of World War II. An inspiring and romantic read for fans of Call the Midwife and The Nightingale Girls.It's May 1945 and at 3pm, nurse Kitty Longthorne listens, together with the other surgical staff at South Manchester's Park Hospital, to Winston Churchill's broadcast on the radio. Germany has signed a declaration of complete surrender. The war is over in Europe and that day is to be celebrated as VE Day. The mood in Park Hospital - still full of wounded American soldiers - is jubilant and hopeful, though Kitty is anything but. Her clandestine squeeze and the man she hopes to marry, James Williams has been giving her the cold shoulder for the last week, and she can't work out why. Furthermore, her twin brother, Ned, is still missing in action - his last known whereabouts point to him being in a Japanese prisoner of war camp.An uplifting, heart-wrenching novel based on the true story of the first ever NHS hospital, for fans of Donna Douglas and Nancy Revell. Praise for NURSE KITTY'S SECRET WAR A galloping read that conjures up life in a late 1940s hospital, complete with fierce matrons and handsome doctors. Nurse Kitty is a feisty heroine who sticks her neck out to protect her patients, while trying to resolve her own family problems and heal her broken heart. It's engaging and atmospheric. - Gill PaulI'm sure readers will love Nurse Kitty as she struggles to find true love when everything is going against it. I loved the end-of-WW2 setting, which is vividly imagined, and the sheer energy of Maggie Campbell's pacy prose. A perfect escapist read. - Kitty Danton, author of A Wartime Wish

A Preview for this title is currently not available.
More Books By Maggie Campbell
View All