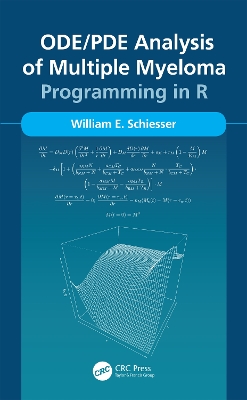 Multiple myeloma is a form of bone cancer. Specifically, it is a cancer of the plasma cells found in bone marrow (bone soft tissue). Normal plasma cells are an important part of the immune system.

Mathematical models for multiple myeloma based on ordinary and partial differential equations (ODE/PDEs) are presented in this book, starting with a basic ODE model in Chapter 1, and concluding with a detailed ODE/PDE model in Chapter 4 that gives the spatiotemporal distribution of four dependent variable components in the bone marrow and peripheral blood: (1) protein produced by multiple myeloma cells, termed the M protein, (2) cytotoxic T lymphocytes (CTLs), (3) natural killer (NK) cells, and (4) regulatory T cells (Tregs).

The computer-based implementation of the example models is presented through routines coded (programmed) in R, a quality, open-source scientific computing system that is readily available from the Internet. Formal mathematics is minimized, e.g., no theorems and proofs. Rather, the presentation is through detailed examples that the reader/researcher/analyst can execute on modest computers using the R routines that are available through a download. The PDE analysis is based on the method of lines (MOL), an established general algorithm for PDEs, implemented with finite differences. A Preview for this title is currently not available.
More Books By William E. Schiesser
View All