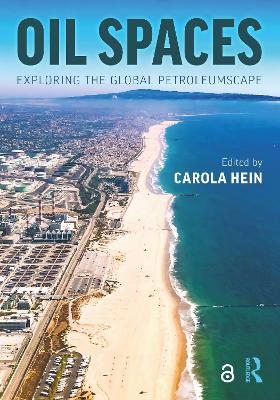 Oil Spaces traces petroleum's impact through a range of territories from across the world, showing how industrially drilled petroleum and its refined products have played a major role in transforming the built environment in ways that are often not visible or recognized. Over the past century and a half, industrially drilled petroleum has powered factories, built cities, and sustained nation-states. It has fueled ways of life and visions of progress, modernity, and disaster.

In detailed international case studies, the contributors consider petroleum's role in the built environment and the imagination. They study how petroleum and its infrastructure have served as a source of military conflict and political and economic power, inspiring efforts to create territories and reshape geographies and national boundaries. The authors trace ruptures and continuities between colonial and postcolonial frameworks, in locations as diverse as Sumatra, northeast China, Brazil, Nigeria, Tanzania, and Kuwait as well as heritage sites including former power stations in Italy and the port of Dunkirk, once a prime gateway through which petroleum entered Europe.

By revealing petroleum's role in organizing and imagining space globally, this book takes up a key task in imagining the possibilities of a post-oil future. It will be invaluable reading to scholars and students of architectural and urban history, planning, and geography of sustainable urban environments.

A Preview for this title is currently not available.
More Books By Carola Hein
View All