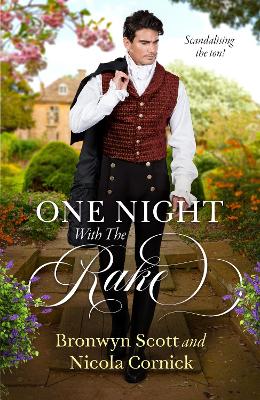 One Night With The Rake

Description - One Night With The Rake by Bronwyn Scott

Determined not to enter into a forced marriage, Julia could see no way out - unless she were to become a ruined woman! Notorious rake Paine Ramsden was reputed to have no qualms about seducing innocents, so maybe he would help with her...predicament.

Certainly, Paine deserved his rakish reputation, yet Julia was so achingly pure, one night with her might just ruin him! Awakening Julia's sensuality aroused unfamiliar feelings in him - was it too late to make them both respectable?

One Night Of Scandal - Nicola Cornick

Deborah Stratton is a respectable widow - or so the inhabitants of the Midwinter villages believe. But she hides a secret that means she'll never marry again...

Lord Richard Kestrel is London's most notorious rake, a dangerous man to be around, a man who has already shockingly offered to make Deborah his mistress. Now Richard has come to realise it is Deborah's hand in marriage he wants - but not before they share one night of scandal...

Buy One Night With The Rake by Bronwyn Scott from Australia's Online Independent Bookstore, BooksDirect.

A Preview for this title is currently not available.
More Books By Bronwyn Scott
View All