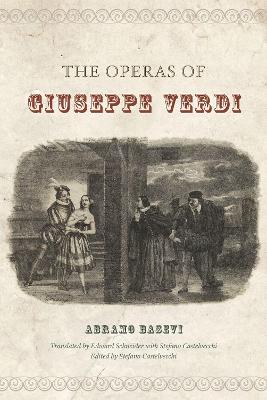 The Operas of Giuseppe Verdi

Description - The Operas of Giuseppe Verdi by Abramo Basevi

Abramo Basevi published his study of Verdi's operas in Florence in 1859, in the middle of the composer's career. The first thorough, systematic examination of Verdi's operas, it covered the twenty works produced between 1842 and 1857-from Nabucco and Macbeth to Il trovatore, La traviata, and Aroldo. But while Basevi's work is still widely cited and discussed-and nowhere more so than in the English-speaking world-no translation of the entire volume has previously been available. The Operas of Giuseppe Verdi fills this gap, at the same time providing an invaluable critical apparatus and commentary on Basevi's work. As a contemporary of Verdi and a trained musician, erudite scholar, and critic conversant with current and past operatic repertories, Basevi presented pointed discussion of the operas and their historical context, offering today's readers a unique window into many aspects of operatic culture, and culture in general, in Verdi's Italy. He wrote with precision on formal aspects, use of melody and orchestration, and other compositional features, which made his study an acknowledged model for the growing field of music criticism. Carefully annotated and with an engaging introduction and detailed glossary by editor Stefano Castelvecchi, this translation illuminates Basevi's musical and historical references as well as aspects of his language that remain difficult to grasp even for Italian readers. Making Basevi's important contribution to our understanding of Verdi and his operas available to a broad audience for the first time, The Operas of Giuseppe Verdi will delight scholars and opera enthusiasts alike.