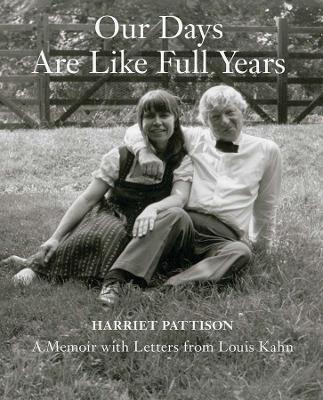 Our Days Are Like Full Years: A Memoir with Letters from Louis Kahn

Description - Our Days Are Like Full Years: A Memoir with Letters from Louis Kahn by Harriet Pattison

On a winter day in 1953, a mysterious man in a sheepskin coat stood out to Harriet Pattison, then a theater student at Yale. She would later learn he was the architect Louis Kahn (1901-1974). This chance encounter served as preamble to a fifteen-year romance, with Pattison becoming the architect's closest confidante, his intellectual partner, and the mother of his only son.

Here for the first time, Pattison recounts their passionate and sometimes searing relationship. Married and twenty-seven years her senior, Kahn sent her scores of letters-many from far-flung places-until his untimely death. This book weaves together Pattison's own story with letters, postcards, telegrams, drawings, and photographs that reveal Kahn's inner life and his architectural thought process, including new insight into some of his greatest works, both built and unbuilt. What emerges is at once a poignant love story and a vivid portrait of a young woman striving to raise a family while forging an artistic path in the shadow of her famous partner.


Buy Our Days Are Like Full Years: A Memoir with Letters from Louis Kahn by Harriet Pattison from Australia's Online Independent Bookstore, BooksDirect.

A Preview for this title is currently not available.
More Books By Harriet Pattison
View All