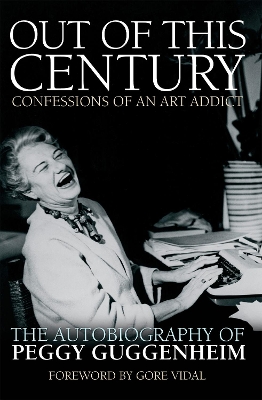 Out of This Century: Confessions of an Art Addict

Description - Out of This Century: Confessions of an Art Addict by Peggy Guggenheim

This is the fascinating autobiography of a society heiress who became the bohemian doyenne of the art world. Written in her own words it is the frank and outspoken story of her life and loves: her stormy relationships with such men as Max Ernst and Jackson Pollock, and her discovery of new artists.

Known as 'the mistress of modern art', Peggy Guggenheim was a passionate collector and major patron. She amassed one of the most important collections of early twentieth-century European and American art embracing Cubism, Surrealism and Expressionism.

A must-read for anyone with an interest in these major-league artists, this seminal period of art history, and the ultimate self-invented woman.

Includes a foreword by Gore Vidal.

Buy Out of This Century: Confessions of an Art Addict by Peggy Guggenheim from Australia's Online Independent Bookstore, BooksDirect.

A Preview for this title is currently not available.
More Books By Peggy Guggenheim
View All