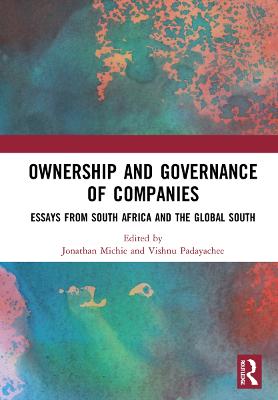 Ownership and Governance of Companies: Essays from South Africa and the Global South

Description - Ownership and Governance of Companies: Essays from South Africa and the Global South by Jonathan Michie

Apartheid South Africa was often thought to run in the interests of the business elite. Yet 27 years after apartheid, those business interests remain largely entrenched. Why? Did the South African business community play a role in engineering this outcome - perhaps recognising the apartheid era was over, and jumping ship in time? Conversely, the mission of the ANC was widely perceived to be to shift wealth and power into the hands of the whole community. Yet despite 'black empowerment' measures, corporate ownership remains largely in white hands - and certainly in the hands of an elite few, even though no longer restricted to whites.

This picture is replicated across the global south, where corporate ownership tends to be concentrated in the hands of an elite, rather than being more democratically spread. Why have alternative corporate forms not been pursued more vigorously, with ownership in the hands of customers, employees, and local communities? In the case of South Africa, where the majority of customers and employees are black, this could have delivered on the ANC's mission to replace the apartheid era with a democratic one - in terms of wealth, incomes and power, as well as in terms of voting and civic rights. This edited volume explores all these questions and looks at ways to align corporate forms with economic and social goals.

The chapters in this book were originally published as special issues of International Review of Applied Economics.

Buy Ownership and Governance of Companies: Essays from South Africa and the Global South by Jonathan Michie from Australia's Online Independent Bookstore, BooksDirect.

A Preview for this title is currently not available.
More Books By Jonathan Michie
View All