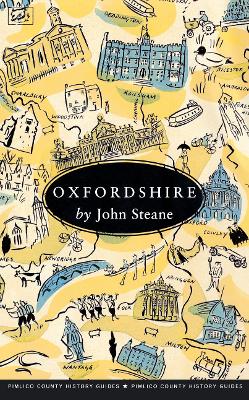 'THE PIMLICO GUIDES provide an original approach to the writing of country histories. Written by authors who live or have roots in the countries of which they give such entertaining accounts, they are highly personal, even idiosyncratic, surveys, helping the reader to appreciate the pleasures of the present as wel as the treasures, oddities, legends and landscapes of the past. ' Christopher Hibbert

Oxfordshire, a land-locked county, is rich in geology, varied in landscape, steeped in history. Through it run the tranquil of the Thames. To the north are the golden stone villages and upland sheep pastures of the Cotswolds. The River Cherwell winds through peaceful cattle meadows and past the walls of the oldest and most celebrated university city in Britain. Great country houses like Blenheim and Chastleton contrast with the car assembly works at Cowley. From the rounded hills in the north to the Chiltern beechwoods in the south, John Steane provides a richly informative guide and an unrivalled sense of place. With an area of 1, 007 square miles, a population of 560, 000 and towns such as Oxford, Abingdon, Banbury, Henley, Witney and Woodstock, Oxfordshire is one of the most literate - and visited counties in Britain.

A Preview for this title is currently not available.
More Books By John Steane
View All