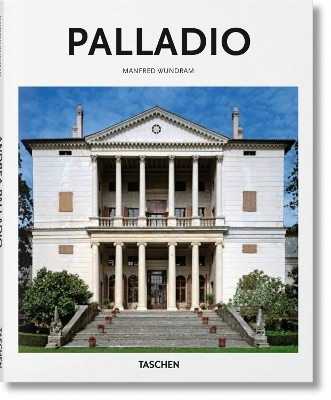 Andrea Palladio (1508-1580) is widely considered the father of Western architecture. Strongly influenced by formal temple designs in Ancient Greece and Rome, he pioneered a revival of Classical symmetry and perspective, and with it created a universal architectural language.
From his humble beginning as a stonemason's apprentice, Palladio rose to become Chief Architect of the Republic of Venice, at the time the epicenter of European innovation. There, he designed the Church of the Redentore and San Giorgio Maggiore on the landmark promontory between the Giudecca Canal and the greater Venetian Lagoon. In nearby Vicenza, Palladio built the world-famous Basilica, the Villa Rotonda, the Teatro Olimpico, and in the surrounding Veneto countryside numerous rural villas noted for their inclusion of local, vernacular architecture within a Classical scheme and the use of porticos to provide liminal spaces between the interior and exterior. Both the Palladian villas and the City of Vicenza are today designated UNESCO World Heritage sites.
Over time, Palladio's architecture evolved into the Palladian style, a universal language of cool, calm elegance that informed buildings from Capitol Hill in Washington, D.C., to Thomas Jefferson's home in Monticello, Virginia, to St Paul's Cathedral, London. This foundational book from TASCHEN Basic Art 2.0 collates Palladio's most significant structures into one dependable introduction, documenting his development into one of the most influential architects of all time.

Other Editions - Palladio by Manfred Wundram A Preview for this title is currently not available.
More Books By Manfred Wundram
View All