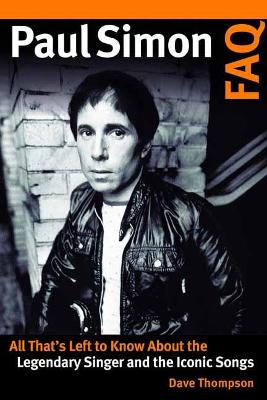 Paul Simon FAQ: All That's Left to Know About the Legendary Singer and the Iconic Songs

Description - Paul Simon FAQ: All That's Left to Know About the Legendary Singer and the Iconic Songs by Dave Thompson

Here is a fascinating, all-encompassing journey through the life and career of one of America s most influential, and literate, songwriters. Beginning with Simon s earliest days as an aspiring teenage idol and Tin Pan Alley songsmith, Paul Simon FAQ takes readers through Simon s sometimes tempestuous relationship with singing partner Art Garfunkel, with whom he established the most popular musical duo in rock history. The book goes behind the scenes of Simon s groundbreaking work at the forefront of world music and follows him to his emotional 2018 final concert before his retirement-from performing live. In addition, Paul Simon FAQ features chapters dedicated not only to Simon s music but also his stage, screen, and television work, his devotion to charity, and more. Influences such as Bob Dylan, the Everly Brothers, and the Child Ballads are examined, while his songwriting is documented not only through his own recordings but also those of the myriad other artists who have covered his compositions. Fact-filled sidebars serve up a wealth of statistics and lists. In short, Paul Simon FAQ is the ultimate guide to the consummate performer.

Buy Paul Simon FAQ: All That's Left to Know About the Legendary Singer and the Iconic Songs by Dave Thompson from Australia's Online Independent Bookstore, BooksDirect.

A Preview for this title is currently not available.
More Books By Dave Thompson
View All

The Ultimate Guide to Vinyl and More: All You Need to Know About Collecting Essential Music from Cylinders and CDs to LPs and Tapes
Dave Thompson
Paperback , Sep '18
20% OFF!
RRP: $52.99 $42.39