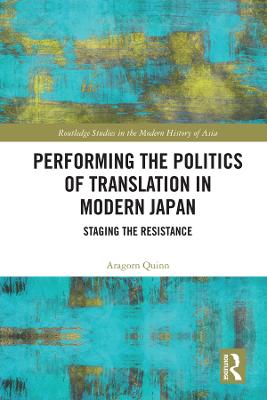 Performing the Politics of Translation in Modern Japan: Staging the Resistance

Description - Performing the Politics of Translation in Modern Japan: Staging the Resistance by Aragorn Quinn

Performing the Politics of Translation in Modern Japan sheds new light on the adoption of concepts that motivated political theatres of resistance for nearly a century and even now underpin the collective understanding of the Japanese nation.

Grounded in the aftermath of the Meiji Restoration in 1868 and analyzing its legacy on stage, this book tells the story of the crucial role that performance and specifically embodied memory played in the changing understanding of the imported Western concepts of "liberty" (jiyu) and "revolution" (kakumei). Tracing the role of the post-Restoration movement itself as an important touchstone for later performances, it examines two key moments of political crisis. The first of these is the Proletarian Theatre Movement of the 1920s and '30s, in which the post-Restoration years were important for theorizing the Japanese communist revolution. The second is in the postwar years when Rights Movement theatre and thought again featured as a vehicle for understanding the present through the past. As such, this book presents the translation of "liberty" and "revolution", not through a one-to-one correspondence model, but rather as a many-to-many relationship. In doing so, it presents a century of evolution in the dramaturgy of resistance in Japan.

This book will be useful to students and scholars of Japanese history, society and culture, as well as literature and translation studies alike.

Other Editions - Performing the Politics of Translation in Modern Japan: Staging the Resistance by Aragorn Quinn 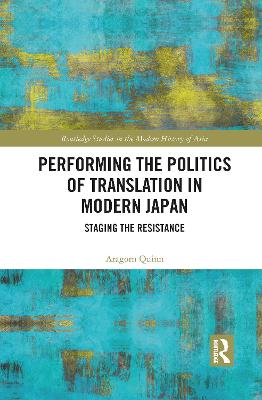 A Preview for this title is currently not available.
More Books By Aragorn Quinn
View All