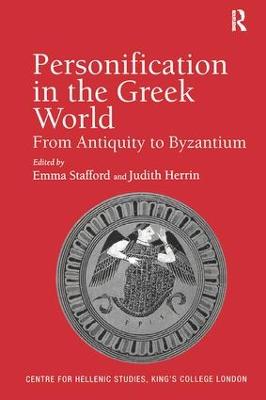 Personification in the Greek World

From Antiquity to Byzantium

Description - Personification in the Greek World by Judith Herrin

Personification, the anthropomorphic representation of any non-human thing, is a ubiquitous feature of ancient Greek literature and art. Natural phenomena (earth, sky, rivers), places (cities, countries), divisions of time (seasons, months, a lifetime), states of the body (health, sleep, death), emotions (love, envy, fear), and political concepts (victory, democracy, war) all appear in human, usually female, form. Some have only fleeting incarnations, others become widely-recognised figures, and others again became so firmly established as deities in the imagination of the community that they received elements of cult associated with the Olympian gods. Though often seen as a feature of the Hellenistic period, personifications can be found in literature, art and cult from the Archaic period onwards; with the development of the art of allegory in the Hellenistic period, they came to acquire more 'intellectual' overtones; the use of allegory as an interpretative tool then enabled personifications to survive the advent of Christianity, to remain familiar figures in the art and literature of Late Antiquity and beyond. The twenty-one papers presented here cover personification in Greek literature, art and religion from its pre-Homeric origins to the Byzantine period. Classical Athens features prominently, but other areas of both mainland Greece and the Greek East are well represented. Issues which come under discussion include: problems of identification and definition; the question of gender; the status of personifications in relation to the gods; the significance of personification as a literary device; the uses and meanings of personification in different visual media; personification as a means of articulating place, time and worldly power. The papers reflect the enormous range of contexts in which personification occurs, indicating the ubiquity of the phenomenon in the ancient Greek world.

A Preview for this title is currently not available.
More Books By Judith Herrin
View All