Description - Peter Paul Rubens and the Counter-Reformation Crisis of the Beati moderni by Ruth S. Noyes

Peter Paul Rubens and the Crisis of the Beati Moderni takes up the question of the issues involved in the formation of recent saints - or Beati moderni (modern Blesseds) as they were called - by the Jesuits and Oratorians in the new environment of increased strictures and censorship that developed after the Council of Trent with respect to legal canonization procedures and cultic devotion to the saints. Ruth Noyes focuses particularly on how the new regulations pertained to the creation of emerging cults of those not yet canonized, the so-called Beati moderni, such as Jesuit founders Francis Xavier and Ignatius Loyola, and Filippo Neri, founder of the Oratorians. Centrally involved in the book is the question of the fate and meaning of the two altarpiece paintings commissioned by the Oratorians from Peter Paul Rubens. The Congregation rejected his first altarpiece because it too specifically identified Filippo Neri as a cult figure to be venerated (before his actual canonization) and thus was caught up in the politics of cult formation and the papacy's desire to control such pre-canonization cults. The book demonstrates that Rubens' second altarpiece, although less overtly depicting Neri as a saint, was if anything more radical in the claims it made for him. Peter Paul Rubens and the Crisis of the Beati Moderni offers the first comparative study of Jesuit and Oratorian images of their respective would-be saints, and the controversy they ignited across Church hierarchies. It is also the first work to examine provocative Philippine imagery and demonstrate how its bold promotion specifically triggered the first wave of curial censure in 1602.

Other Editions - Peter Paul Rubens and the Counter-Reformation Crisis of the Beati moderni by Ruth S. Noyes 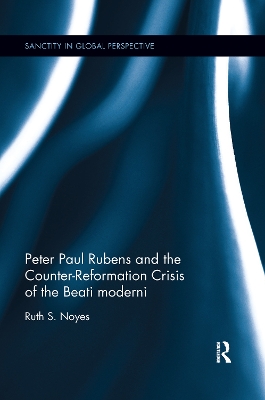 A Preview for this title is currently not available.
More Books By Ruth S. Noyes
View All