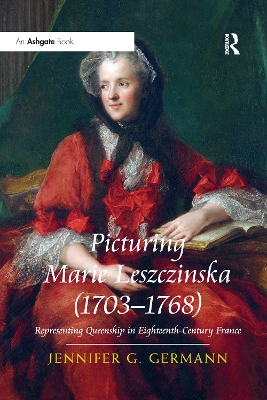 Portraits of Queen Marie Leszczinska (1703-1768) were highly visible in eighteenth-century France. Appearing in royal chateaux and, after 1737, in the Parisian Salons, the queen's image was central to the visual construction of the monarchy. Her earliest portraits negotiated aspects of her ethnic difference, French gender norms, and royal rank to craft an image of an appropriate consort to the king. Later portraits by Maurice-Quentin de La Tour, Carle Van Loo, and Jean-Marc Nattier contributed to changing notions of queenship over the course of her 43 year tenure. Whether as royal wife, devout consort, or devoted mother, Marie Leszczinska's image mattered. While she has often been seen as a weak consort, this study argues that queenly images were powerful and even necessary for Louis XV's projection of authority. This is the first study dedicated to analyzing the queen's portraits. It engages feminist theory while setting the queen's image in the context of portraiture in France, courtly factional conflict, and the history of the French monarchy. While this investigation is historically specific, it raises the larger problem of the power of women's images versus the empowerment of women, a challenge that continues to plague the representation of political women today. A Preview for this title is currently not available.
More Books By Jennifer G Germann
View All