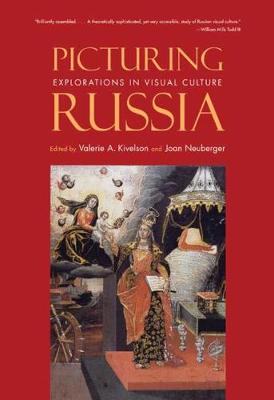 What can Russian images and objects-a tsar's crown, a provincial watercolor album, the Soviet Pioneer Palace-tell us about the Russian people and their culture?

This wide-ranging book is the first to explore the visual culture of Russia over the entire span of Russian history, from ancient Kiev to contemporary, post-Soviet society. Illustrated with more than one hundred diverse and fascinating images, the book examines the ways that Russians have represented themselves visually, understood their visual environment, and used visual images in social and political contexts. Expert contributors discuss images and objects from all over the Russian/Soviet empire, including consumer goods, architectural monuments, religious icons, portraits, news and art photography, popular prints, films, folk art, and more.

Each of the concise and accessible essays in the volume offers a fresh interpretation of Russian cultural history. Putting visuality itself in focus as never before, Picturing Russia adds an entirely new dimension to the study of Russian literature, history, art, and culture. The book enriches our understanding of visual documents and shows the variety of ways they serve as far more than mere illustration.

A Preview for this title is currently not available.
More Books By Valerie A. Kivelson
View All