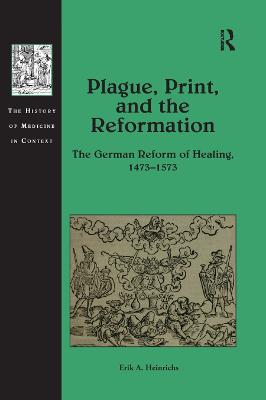 Description - Plague, Print, and the Reformation: The German Reform of Healing, 1473 1573 by Erik A. Heinrichs

This book surveys a neglected set of sources, German plague prints and treatises published between 1473 and 1573, in order to explore the intertwined histories of plague, print, medicine and religion during the Reformation era. It argues that a particularly German reform of healing flourished in printed texts during the Renaissance and Reformation as physicians and clerics devised innovative responses to the era's persistent epidemics. These reforms are "German" since they reflect the innovative trends that originated in or were particularly strong within German-speaking lands, including the rapid growth of vernacular print, Protestantism, and new interest in alchemy and the native plants of Northern Europe that were unknown to the ancients. Their reforms are also "German" in the sense that they unfolded mainly in vernacular print, which encouraged physicians to produce local knowledge, grounded in personal experience and local observations as much as universal theories. This book contributes to the history of medicine and science by tracing the growth of more empirical forms of medical knowledge. It also contributes to the history of the Renaissance and Reformation by uncovering the innovative contributions of various forgotten physicians. This book presents the broadest study of German plague treatises in any language.

Buy Plague, Print, and the Reformation: The German Reform of Healing, 1473 1573 by Erik A. Heinrichs from Australia's Online Independent Bookstore, BooksDirect.

Other Editions - Plague, Print, and the Reformation: The German Reform of Healing, 1473 1573 by Erik A. Heinrichs 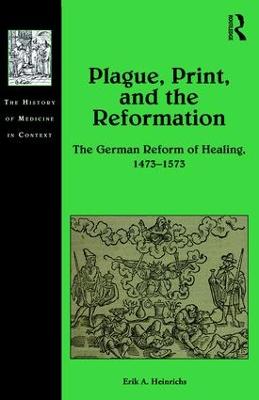 A Preview for this title is currently not available.
More Books By Erik A. Heinrichs
View All