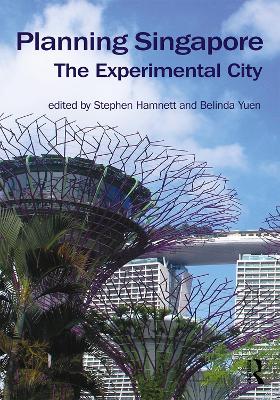 Two hundred years ago, Sir Stamford Raffles established the modern settlement of Singapore with the intent of seeing it become 'a great commercial emporium and fulcrum'. But by the time independence was achieved in 1965, the city faced daunting problems of housing shortage, slums and high unemployment. Since then, Singapore has become one of the richest countries on earth, providing, in Sir Peter Hall's words, 'perhaps the most extraordinary case of economic development in the history of the world'. The story of Singapore's remarkable achievements in the first half century after its independence is now widely known.

In Planning Singapore: The Experimental City, Stephen Hamnett and Belinda Yuen have brought together a set of chapters on Singapore's planning achievements, aspirations and challenges, which are united in their focus on what might happen next in the planning of the island-state. Chapters range over Singapore's planning system, innovation and future economy, housing, biodiversity, water and waste, climate change, transport, and the potential transferability of Singapore's planning knowledge. A key question is whether the planning approaches, which have served Singapore so well until now, will suffice to meet the emerging challenges of a changing global economy, demographic shifts, new technologies and the existential threat of climate change. Singapore as a global city is becoming more unequal and more diverse. This has the potential to weaken the social compact which has largely existed since independence and to undermine the social resilience undoubtedly needed to cope with the shocks and disruptions of the twenty-first century. The book concludes, however, that Singapore is better-placed than most to respond to the challenges which it will certainly face thanks to its outstanding systems of planning and implementation, a proven capacity to experiment and a highly developed ability to adapt quickly, purposefully and pragmatically to changing circumstances.