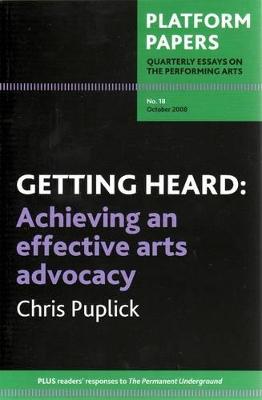 Australia's political system is remarkably open. Most interest groups have a voice to government, but the arts' record is unimpressive. Its continuing failure to get heard where it counts, and to turn its artistic, commercial and international successes into ongoing government support, reflects the failure of practitioners to understand the political system.

In a stern disputation aimed at shaking the arts into coherent action, Puplick, a former federal Shadow Minister for the Arts, analyses the problem and calls for industrial unity.

'If everyone wants their own festival, their own arts precinct, their own flagship companies, what is the hope that a united front will ever be presented', he writes. 'There is nothing that a government likes more than its mendicants to be disorganised.'

Cultural diversity in lobbying, he says, is death.

A Preview for this title is currently not available.
More Books By Chris Puplick
View All