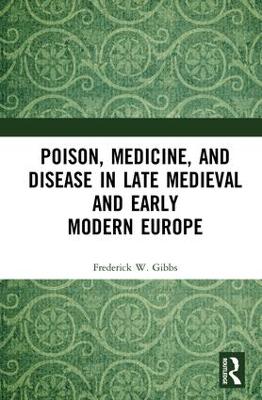 This book presents a uniquely broad and pioneering history of premodern toxicology by exploring how late medieval and early modern (c. 1200-1600) physicians discussed the relationship between poison, medicine, and disease. Drawing from a wide range of medical and natural philosophical texts-with an emphasis on treatises that focused on poison, pharmacotherapeutics, plague, and the nature of disease-this study brings to light premodern physicians' debates about the potential existence, nature, and properties of a category of substance theoretically harmful to the human body in even the smallest amount. Focusing on the category of poison (venenum) rather than on specific drugs reframes and remixes the standard histories of toxicology, pharmacology, and etiology, as well as shows how these aspects of medicine (although not yet formalized as independent disciplines) interacted with and shaped one another. Physicians argued, for instance, about what properties might distinguish poison from other substances, how poison injured the human body, the nature of poisonous bodies, and the role of poison in spreading, and to some extent defining, disease. The way physicians debated these questions shows that poison was far from an obvious and uncontested category of substance, and their effort to understand it sheds new light on the relationship between natural philosophy and medicine in the late medieval and early modern periods.

A Preview for this title is currently not available.
More Books By Frederick W Gibbs
View All