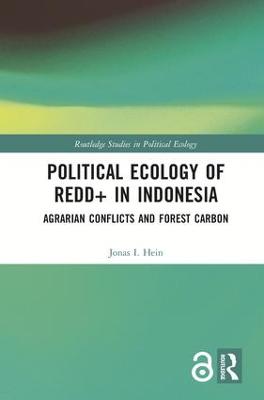 Description - Political Ecology of REDD+ in Indonesia: Agrarian Conflicts and Forest Carbon by Jonas I. Hein

Indonesia's commitment to reducing land-based greenhouse gas emissions significantly includes the expansion of conservation areas, but these developments are not free of conflicts. This book provides a comprehensive analysis of agrarian conflicts in the context of the implementation of REDD+ (Reducing Emissions from Deforestation and Forest Degradation) and forest carbon offsetting in Indonesia, a country where deforestation is a major issue.

The author analyzes new kinds of transnational agrarian conflicts which have strong implications for global environmental justice in the REDD+ pilot province of Jambi on the island of Sumatra. The chapters cover: the rescaling of the governance of forests; privatization of conservation; and the transnational dimensions of agrarian conflicts and peasants' resistance in the context of REDD+. The book builds on an innovative conceptual approach linking political ecology, politics of scale and theories of power. It fills an important knowledge and research gap by focusing on the socially differentiated impacts of REDD+ and new forest carbon offsetting initiatives in Southeast Asia, providing a multi-scalar perspective.

It is aimed at scholars in the areas of political ecology, human geography, climate change mitigation, forest and natural resource management, as well as environmental justice and agrarian studies.