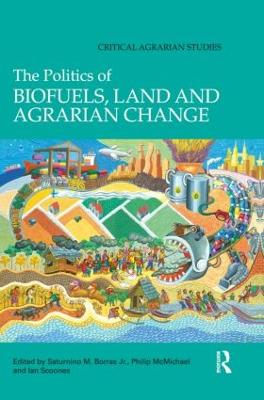 The Politics of Biofuels, Land and Agrarian Change

Description - The Politics of Biofuels, Land and Agrarian Change by Saturnino Borras Jr.

This book addresses key questions on biofuels within agrarian political economy, political sociology and political ecology. Contributions are based on fresh empirical materials from different parts of the world. The book starts with four key questions in agrarian political economy: Who owns what? Who does what? Who gets what? And what do they do with the surplus wealth? It also addresses the emergent social and political relations in the biofuel complex and, given the impacts on natural resources and sustainability, engages with questions about people-environment interactions. At the same time, the book is concerned with the politics of representation, that is, what are the discursive frames through which biofuels are promoted and/or opposed?

The book analyses the institutional structures, and cultures of energy consumption on which a biofuels complex depends, and the alternative political and ecological visions emerging that call the biofuels complex into question. Across sixteen chapters presenting material from five regions across the North-South divide and focusing on fourteen countries including Brazil, Indonesia, India, USA and Germany, these topics are addressed within the following themes: global (re)configurations; agro-ecological visions; conflicts, resistances and diverse outcomes; state, capital and society relations; mobilising opposition, creating alternatives; and change and continuity.

This book was published as a special issue of the Journal of Peasant Studies.

Other Editions - The Politics of Biofuels, Land and Agrarian Change by Saturnino Borras Jr. A Preview for this title is currently not available.
More Books By Saturnino Borras Jr.
View All