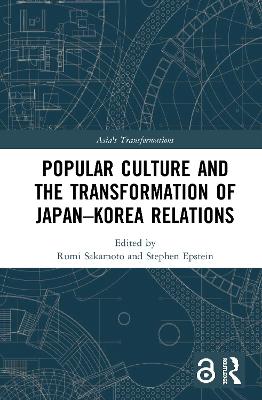 Popular Culture and the Transformation of Japan-Korea Relations

This book presents essays exploring the ways in which popular culture reflects and engenders ongoing changes in Japan-Korea relations.

Through a broad temporal coverage from the colonial period to the contemporary, the book's chapters analyse the often contradictory roles that popular culture has played in either promoting or impeding nationalisms, regional conflict and reconciliations between Japan and Korea. Its contributors link several key areas of interest in East Asian Studies, including conflicts over historical memories and cultural production, grassroots challenges to state ideology, and the consequences of digital technology in Japan and South Korea.

Taking recent discourse on Japan and South Korea as popular cultural superpowers further, this book expands its focus from mainstream entertainment media to the lived experience of daily life, in which sentiments and perceptions of the "popular" are formed. It will be useful to students and scholars of Japanese and Korean studies, as well as film studies, media studies and cultural studies more widely.

A Preview for this title is currently not available.
More Books By Rumi Sakamoto
View All