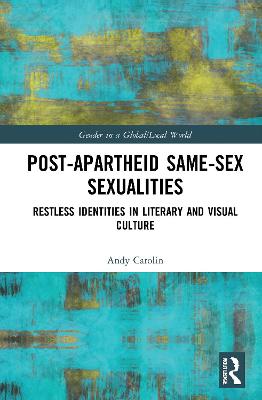 This book examines how same-sex sexualities are represented in several post-apartheid South African cultural texts, drawing on a rich local archive of same-sex sexualities that includes recent fiction, drama, film, photography, and popular print culture. While the book situates these texts within the specific context of post-apartheid South Africa, it also looks outwards towards transnational connectivity and cultural flows.

The author uses the idea of restlessness to refer to the uneven flow of cultural tropes, political sentiment, ideas, ideologies, and representational modes across geographical boundaries, across time and space, and between genres, presenting sexual cultures as simultaneously rooted and transnational. He focuses on how notions of race and gender, in the shadow of colonialism and apartheid, play out in the present and shape how sexualities are represented.

This interdisciplinary book offers a conceptual entry point to several areas of study, including transnationalism, literary and cultural studies, critical race theory, gender and sexuality studies, and African studies, and will be of interest to students and researchers across these fields. Its inclusion of a range of textual genres extends its reach into visual culture, film and media studies, history, and politics.