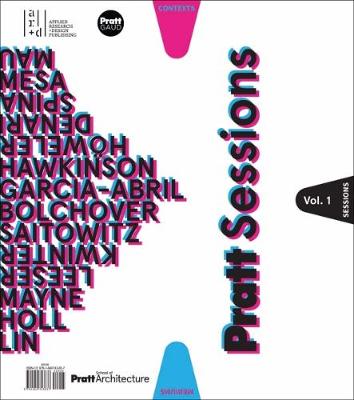 Pratt Sessions presents a series of conversations between notable practitioners and thinkers. It is a distributed symposium that is curated and yet open-ended. Based on an ongoing lecture series at Pratt Institute's Graduate Architecture and Urban Design programme, each session brings together two participants as a means of instigating discourse and dissolving and/or reinforcing the artifice of geographically-based discourse networks. Participants are carefully paired together based on the content of their work and the region in which they reside and/or practice. Participants frame their work around a disciplinary provocation in short, non-standard lecture presentations, and engage in an in-depth dialogue. Pratt Sessions is intended as a book series, each volume featuring six conversations, which originally took place over the course of two academic semesters. The six sessions are divided in two areas of focus, exploring and examining how new mediums and new contexts can be defined, redefined, and understood within the realm of architectural design. AUTHORS: Julia van den Hout specialises in editorial, curatorial, and research projects within architecture, Original Copy aims to generate new productive content and open conversation, focusing on architectural discourse beyond the mere presentation of built work. Julia van den Hout founded Original Copy in 2014, after serving as director of press and marketing at Steven Holl Architects for over six years. In 2011, she co-founded CLOG, an international publication that critically explores one topic at a time from as many perspectives as possible. David Erdman is chair of the Department of Graduate Architecture & Urban Design at Pratt Institute's School of Architecture, and he is a Rome Prize Fellow. He co-founded davidclovers in 2007, where he oversaw and designed over 20 completed projects in Hong Kong and elsewhere prior to repatriating in 2016. He earlier had co-founded servo in 1999, where he oversaw and designed projects in Los Angeles until 2006. SELLING POINTS: Based on an ongoing lecture series at Pratt Institute's Graduate Architecture and Urban Design programme Pratt Sessions presents conversations between notable practitioners and thinkers, and serves as a distributed symposium that is curated yet open-ended; exploring current manifestations and future potentials in discourse and the profession 120 colour images

A Preview for this title is currently not available.
More Books By Julia van den Hout
View All