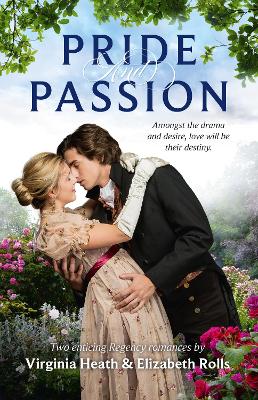 Amongst the drama and desire, love will be their destiny

Lady Hannah Steers has three reasons to loathe and despise Ross Jameson. He's a scandalous libertine, he stole her home and he was responsible for the death of her brother!

Determined to expose Ross for the rogue he is, Hannah dons a disguise and infiltrates his home as his new housekeeper. Unfortunately, this scoundrel proves himself to be the epitome of temptation and, instead of building a case against him, Hannah finds herself in a position she never expected...falling head over heels in love with him!

In Debt To The Earl - Elizabeth Rolls

In his quest for revenge against a disreputable card sharp, James, Earl of Cambourne, discovers the man's innocent daughter. While her surroundings are impoverished, her dignity and refinement are unmistakable, and James faces an unsettling question - what will be her fate if he brings her father to justice?

Although yearning for love and comfort, Lucy resists the Earl's surprising offer of protection. That is until a price is made on her virginity, and James is the only man who can save her.

A Preview for this title is currently not available.
More Books By Elizabeth Rolls
View All