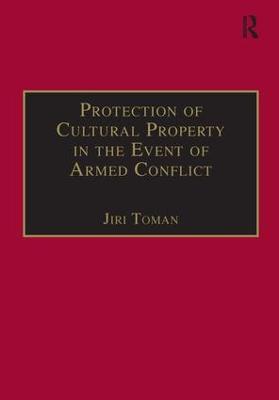 The Protection of Cultural Property in the Event of Armed Conflict

Commentary on the Convention for the Protection of Cultural Property in the Event of Armed Conflict and its Protocol, Signed on 14 May 1954 in The Hague, and on Other Instruments of International Law Concerning Such Protection

At the request of UNESCO, Jiri Toman, Acting Director of the Henry Dunant Institute in Geneva has written this detailed analysis of the 1954 Hague Convention for the Protection of Cultural Property in the Event of Armed Conflict - still the only universal legal instrument in this field. The author has used the materials that emerged from the preparatory work for the Convention and has taken numerous examples from UNESCO's records about the application of the Convention in conflicts over the last 40 years to illustrate this article-by-article commentary on the Convention itself, the Regulations for its Execution, and its Protocol. The author establishes parallels with other international legal instruments such as the 1977 Protocols Additional to the 1949 Geneva Conventions or the other UNESCO conventions relating to cultural heritage and puts forward ideas for a more general study of the protection of cultural property in the event of armed conflict and the legal and practical ways of achieving this. This work should satisfy the expectations of politicians and those responsible for culture in the countries that are States Parties to the Convention, now numbering more than 80, and of those that are considering becoming parties to it, given the increasing calls being made for the international community to have greater powers to defend the cultural heritage from attacks to which it is too often exposed in armed conflicts today.

Buy The Protection of Cultural Property in the Event of Armed Conflict by Jiri Toman from Australia's Online Independent Bookstore, BooksDirect.

A Preview for this title is currently not available.
More Books By Jiri Toman
View All