This book provides a comprehensive overview of the law surrounding PPPs in the Middle East and North African region.

The significance of liberalised and integrated Public Private Partnership Contracts as an essential component of the world legal and policy order is well documented. The regulation of PPPs is justified economically to allow for competition in the relevant public service and to achieve price transparency, thus resulting in significant savings for the public sector. In parallel to the economic justifications, legal imperatives have also called for the regulation of PPPs in order to allow free movement of goods and services and to prohibit discrimination on grounds of nationality. The need for competitiveness and transparency in delivering public services through PPPs is considered a safeguard to achieve international standards in delivering public utility services. First, it assesses the compatibility of the current PPPs legislation and regulation in the MENA region with the international standards of legislation and regulation prevalent in many other countries, including the UK, France and Brazil. Secondly, it compares the practices in the MENA region with those of international bodies such as the OECD and World Bank. Comparisons are then made between the MENA countries and those in Europe and Asia with regard to the influence of culture, policy and legal globalization.

The book will be of interest to scholars and students in the field of international contract law, public law and state contracts, finance law and private law. 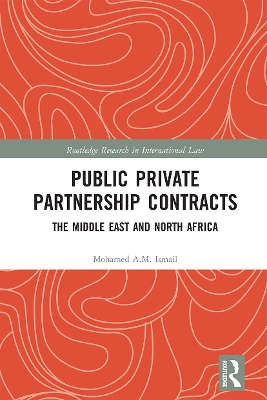 A Preview for this title is currently not available.
More Books By Mohamed A.M. Ismail
View All