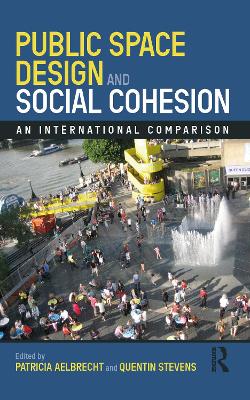 Social cohesion is often perceived as being under threat from the increasing cultural and economic differences in contemporary cities and the increasing intensity of urban life. Public space, in its role as the main stage for social interactions between strangers, clearly plays a role in facilitating or limiting opportunities for social cohesion. But what exactly is social cohesion, how is it experienced in the public realm, and what role can the design of city spaces have in supporting or promoting it? There are significant knowledge gaps between the social sciences and design disciplines and between academia and practice, and thus a dispersed knowledge base that currently lacks nuanced insight into how urban design contributes to social integration or segregation.

This book brings together scholarly knowledge at the intersection of public space design and social cohesion. It is based on original scholarly research and a depth of urban design practice, and analyses case studies from a variety of cities and cultures across the Global North and Global South. Its interdisciplinary, cross-cultural analysis will be of interest to academics, students, policymakers and practitioners engaged with a range of subject areas, including urban design, urban planning, architecture, landscape, cultural studies, human geography, social policy, sociology and anthropology. It will also have significant appeal to a wider non-academic readership, given its topical subject matter. A Preview for this title is currently not available.
More Books By Patricia Aelbrecht
View All