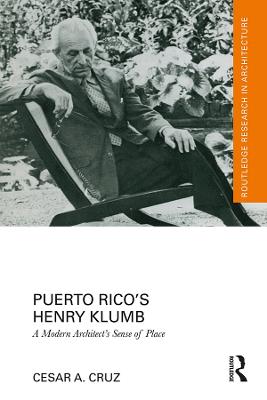 This book follows Henry Klumb's life in architecture from Cologne, Germany to Puerto Rico. Arriving on the island, Klumb was a one-time German immigrant, a moderately successful designer, and previously a senior draftsman with Frank Lloyd Wright.

Over the next forty years Klumb would emerge as Puerto Rico's most prolific, locally well-known, and celebrated modern architect. In addition to becoming a leading figure in Latin American modern architecture, Klumb also became one of Frank Lloyd Wright's most accomplished proteges, and an architect with a highly attuned social and environmental consciousness. Cruz explores his life, works, and legacy through the lens of a sense of place, defined as the beliefs that people adopt, actions undertaken, and feelings developed towards specific locations and spaces. He argues that the architect's sense of place was a defining quality of his life and work, most evident in the houses he designed and built in Puerto Rico.

Other Editions - Puerto Rico's Henry Klumb: A Modern Architect's Sense of Place by Cesar A. Cruz A Preview for this title is currently not available.
More Books By Cesar A. Cruz
View All