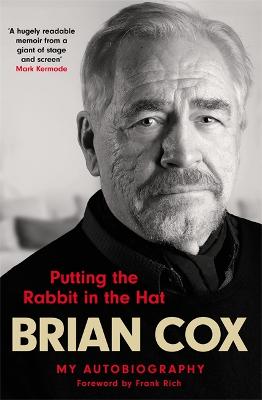 Putting the Rabbit in the Hat: the fascinating memoir by acting legend and Succession star

Description - Putting the Rabbit in the Hat: the fascinating memoir by acting legend and Succession star by Brian Cox

The long-awaited memoir by movie and theatre legend, Brian Cox.A Guardian, Times, Sunday Times and Independent Book of the Year*Featuring a foreword by the executive producer of Succession, Frank Rich, an executive producer of HBO's Succession, a former chief drama critic of The New York Times, and the author of the memoir Ghost Light.*'One of the best showbiz memoirs ever written... it's as funny as it is furious... Brian Cox has done everything and with this book he leaves everyone else standing' - Mail on Sunday'Absolute heaven' - Sunday Times'A hugely readable memoir from a giant of stage and screen' - Mark Kermode'A life well lived and a story well told. From first page to last Brian Cox the great actor is Brian Cox the great storyteller, and nobody is spared his sharp eye and his caustic wit, himself and some big Hollywood names included' - Alastair Campbell'Laced with his characteristic generosity, self-deprecation and cut-the-crap wisdom' - Harriet Walter'Mesmerizing' - Peter Biskind'Blisteringly brilliant' - Bryony Gordon'Funny and irreverent' - The Times From Titus Andronicus with the RSC to media magnate Logan Roy in HBO's Succession, Brian Cox has made his name as an actor of unparalleled distinction and versatility. We know him on screen, but few know of his extraordinary life story.Growing up in Dundee, Scotland, Cox lost his father when he was just eight years old and was brought up by his three elder sisters in the aftermath of his mother's nervous breakdowns and ultimate hospitalization. After joining the Dundee Repertory Theatre at the age of fifteen, you could say the rest is history - but that is to overlook the enormous graft that has gone into the making of the legend we know today. This is a rags-to-riches life story like no other - a seminal autobiography that both captures Cox's distinctive voice and his very soul. Rich in emotion and meaning, with plenty of laughs along the way, it will be a classic in the vein of The Moon's a Balloon by David Niven and What's It All About by Michael Caine.

Buy Putting the Rabbit in the Hat: the fascinating memoir by acting legend and Succession star by Brian Cox from Australia's Online Independent Bookstore, BooksDirect.

A Preview for this title is currently not available.
More Books By Brian Cox
View All