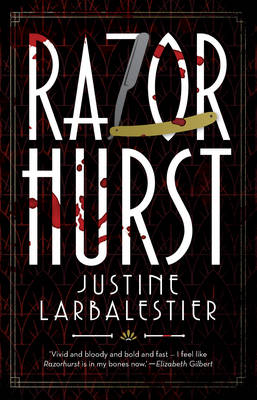 Kelpie knows the dangers of the Sydney streets. Ghosts have kept her alive, steering her to food and safety, but they are also her torment.

Dymphna is Gloriana Nelson's 'best girl'. She knows the highs and lows of life, but she doesn't know what this day has in store for her.

When Dymphna meets Kelpie over the corpse of Jimmy Palmer, Dymphna's latest boyfriend, she pronounces herself Kelpie's new protector. But Dymphna's life is in danger too and she needs an ally. And while Jimmy's ghost wants to help, the dead cannot protect the living.

Gloriana Nelson's kingdom is crumbling and Mr Davidson is determined to have all of Razorhurst - including Dymphna. As loyalties shift and betrayal threatens at every turn, Dymphna and Kelpie are determined to survive what is becoming a day with a high body count.

'Vivid and bloody and bold and fast; I feel like Razorhurst is in my bones now.' Elizabeth Gilbert