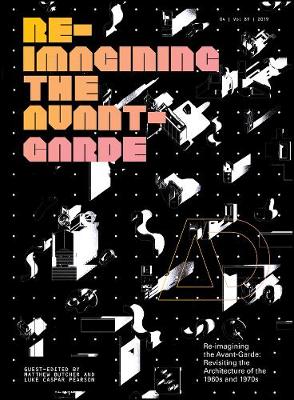 Re-Imagining the Avant-Garde: Revisiting the Architecture of the 1960s and 1970s

Description - Re-Imagining the Avant-Garde: Revisiting the Architecture of the 1960s and 1970s by Matthew Butcher

The 1960s and 1970s avant-garde has been likened to an 'architectural Big Bang', such was the intensity of energy and ambition in which it exploded into the postwar world. Marked out by architectural projects that redefined the discipline, it remains just as influential today. References to the likes of Archizoom, Peter Eisenman, John Hejduk and Superstudio abound. Highly diverse, the avant-garde cannot be defined as a single strand or tendency. It was divergent geographically - reaching from Europe to North America and Japan - and in its political, formal and cultural preoccupations. It was unified, though, as a critical and experimental force, critiquing contemporary society against the backdrop of extreme social and political upheaval: the Paris riots of May 1968, the anti-Vietnam war movement in America and the looming ecological crisis.
Re-imagining the Avant-garde outlines how in contemporary architectural practice, avant-garde projects retain their power as historical precedents, as barometers of a particular design ethos, as critiques of society and instigators of new formal techniques. Given the far-reaching impact of the subsequent digital revolution, which has since reshaped every aspect of practice, the issue asks why this historical period continues to retain its undeniable grip on current architecture.
Contributors: Pablo Bronstein and Sam Jacob, Sarah Deyong, Stylianos Giamarelos, Damjan Jovanovic, Andrew Kovacs, Perry Kulper, Igor Marjanovic, William Menking, Michael Sorkin, Neil Spiller and Mimi Zeiger.
Featured architects: Archizoom, Andrea Branzi, Jimenez Lai, Luis Miguel (Koldo) Lus Arana (Klaus), NEMESTUDIO, Superstudio and UrbanLab.

Buy Re-Imagining the Avant-Garde: Revisiting the Architecture of the 1960s and 1970s by Matthew Butcher from Australia's Online Independent Bookstore, BooksDirect.

A Preview for this title is currently not available.
More Books By Matthew Butcher
View All